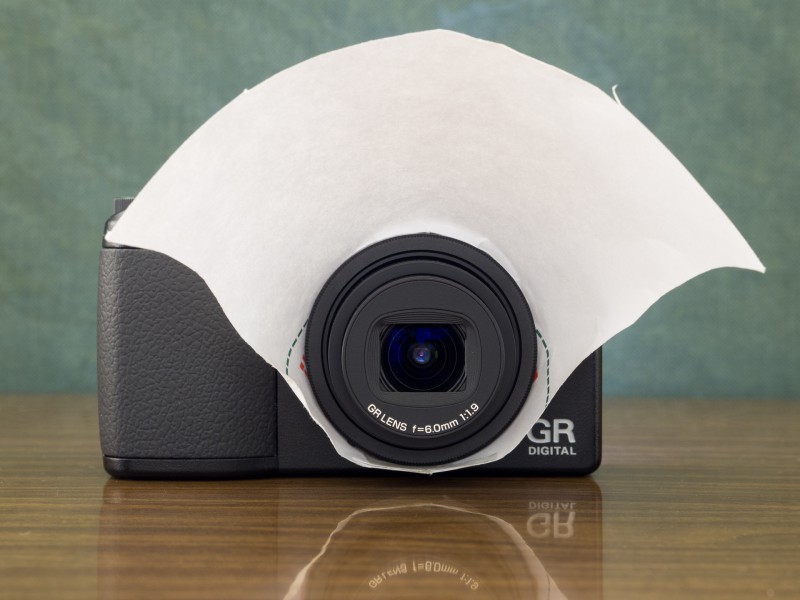 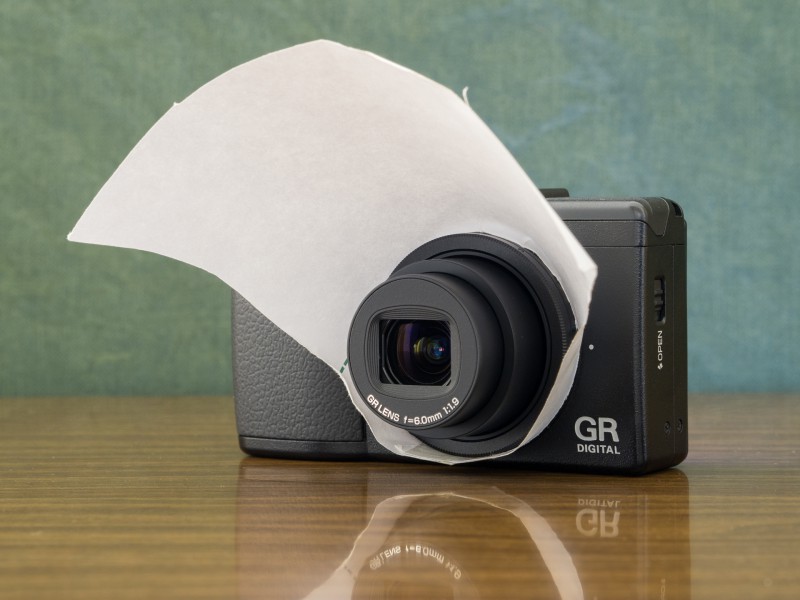 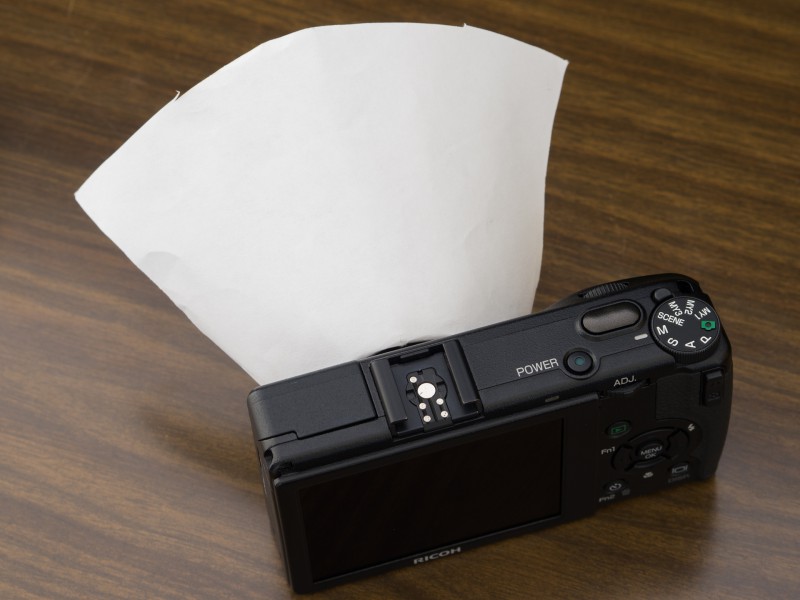 It looks rather amateurishly cut out, doesn’t it? In my defense I’d like to add, that I’m not a particularly crafty person and that I’m much better at taking things apart than putting them back together or making something out of raw materials. I’m currently working on a better version, which should be more robust and less fiddly…and which should look nicer.

But let’s see how it works and what the benefits are of using a diffuser – even one as primitive as this one – when shooting macro with such a wide angle lens, like the fixed lens in the Ricoh GRD3.

As you can see below, the diffuser redirects quite a bit of light downwards in the direction of the subject, illuminating it quite effectively with soft light. The angel figurine is much larger than typical macro subjects I shoot with the GRD3, but for some reason I decided to use it instead of something smaller. And I was too lazy to reshoot the scene of the GRD3’s flash firing, after I realized that I’ve made a mistake. 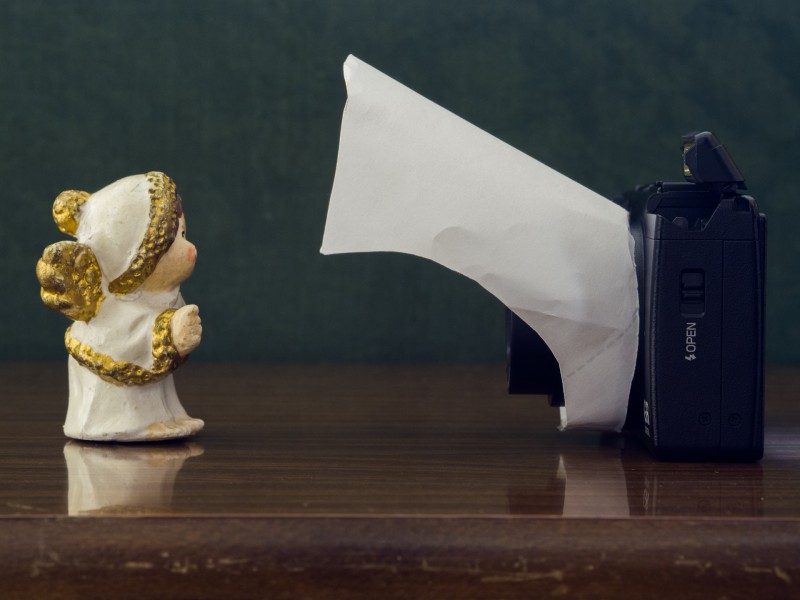 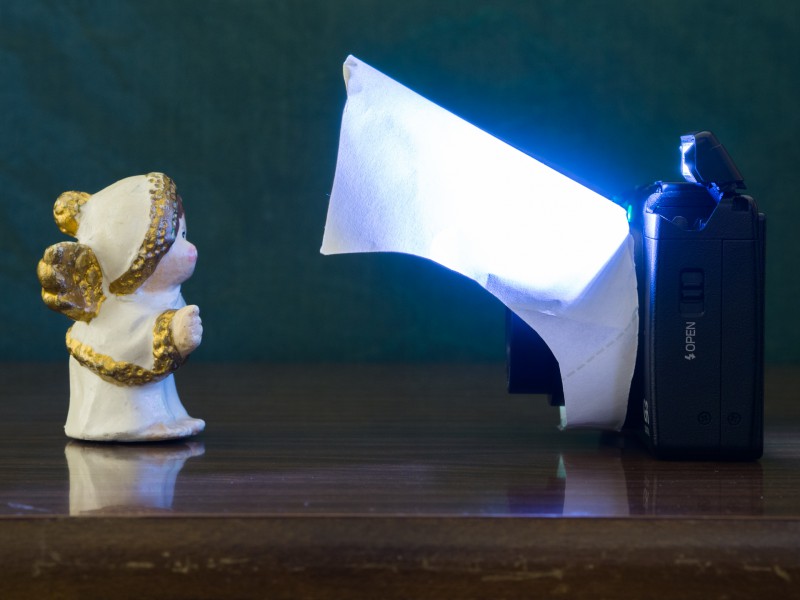 However I did take three photos of a microSD card with the GRD3, in order to show you the benefits of using a diffuser. The first one was shot without flash. As you can see, when the light in the background is strong – which is often the case in macro photography – you have to make a choice between underexposing the subject and overexposing the background. As a result the contrast is rather low, due to needing to brighten up the shadows and recover the highlights (if at all possible). The second image was shot with flash but without the diffuser. The subject is dark, because the flash is blocked by the lens. With a wide angle macro lens you have to get very close to the subject – we are talking about several millimeters – which is why the lens is casting a shadow on the subject. The third photo was shot with flash and with the diffuser. In my opinion it looks the best, with both the subject and background being lit sufficiently. 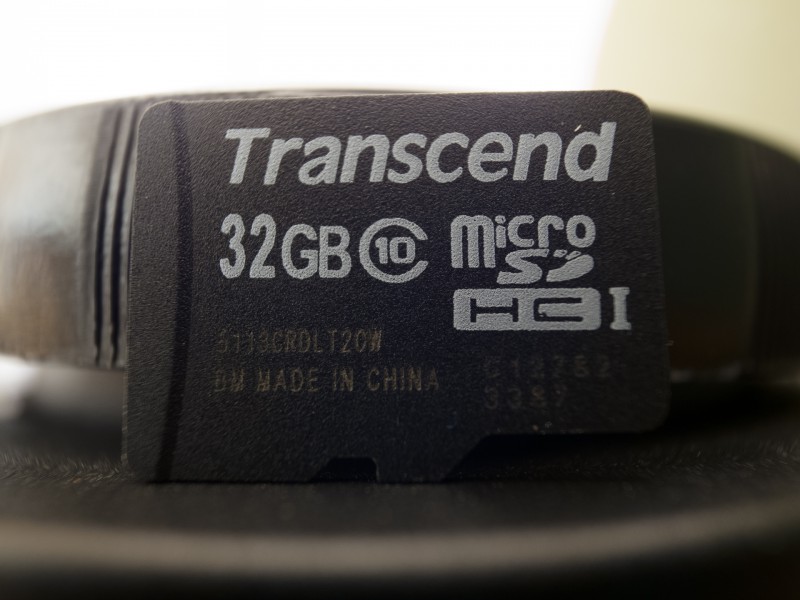 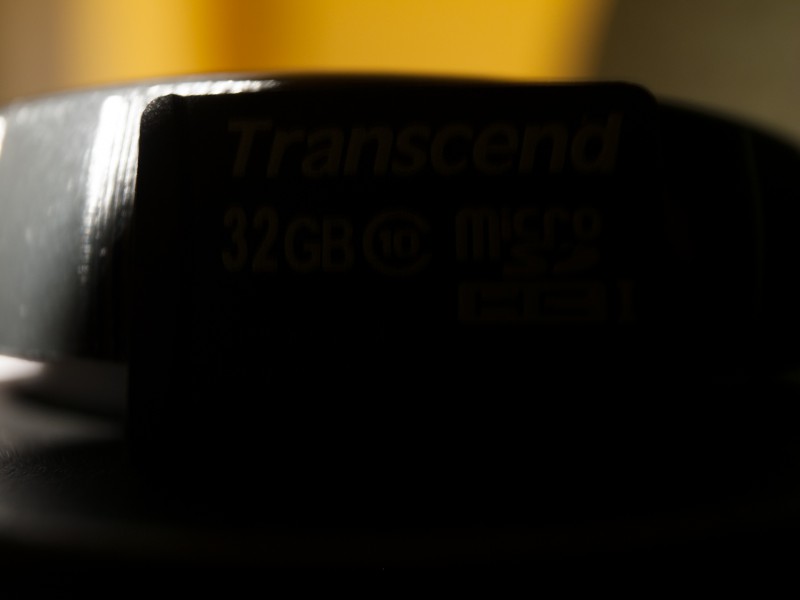 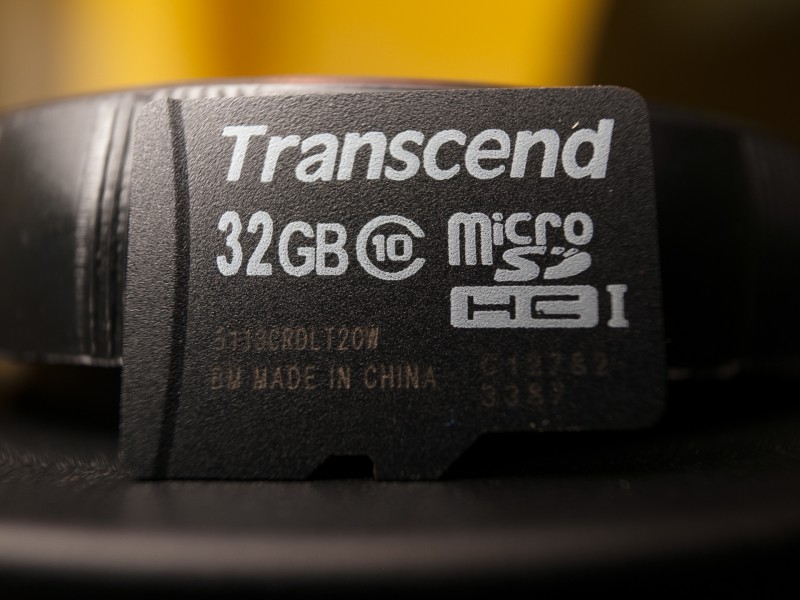 There is one thing that I’m trying to figure out, though, which has to do with the position of the GRD3’s built-in flash. I’m not sure how to redirect the light more to the right side of the frame. Being that the flash is situated one the left side of the camera, the corresponding part of the image always looks brighter. It isn’t immediately apparent in most photos, but in some it is a problem. Of course, if you are using a compact camera that has a built-in flash aligned with the lens axis, this shouldn’t be a problem.

I’ve taken two more images from the front, to illustrate why a diffuser makes the light soft. Please ignore the left green beam of light in the first image. That is the AF assist light, which can’t be turned off when the self-timer is activated. It doesn’t go off when you are shooting macro in the single-shot mode – which you should be doing most of the time. Concentrate on the naked flash to the right in the first picture and compare the small area the light is emitting from to the 8 to 10 times larger overexposed area of the diffuser in the second image. Keep in mind: the larger the light source in relation to the subject, the softer the light. 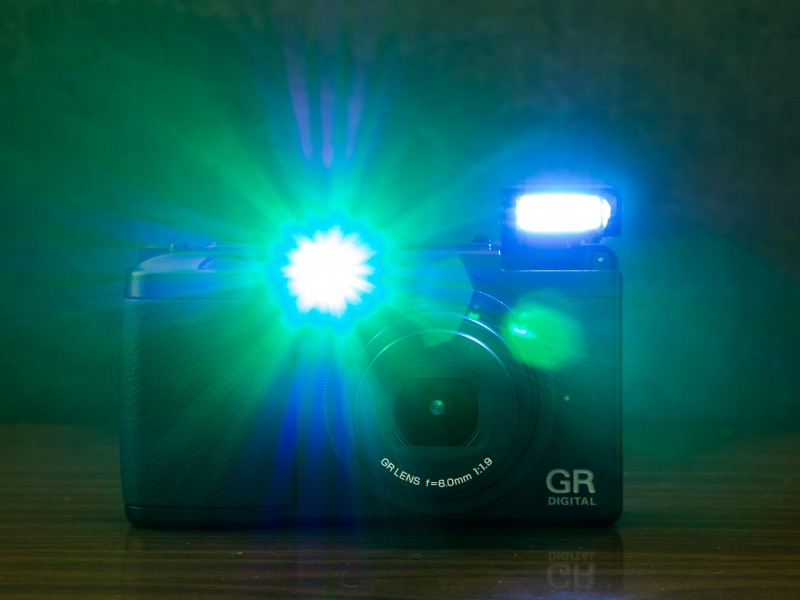 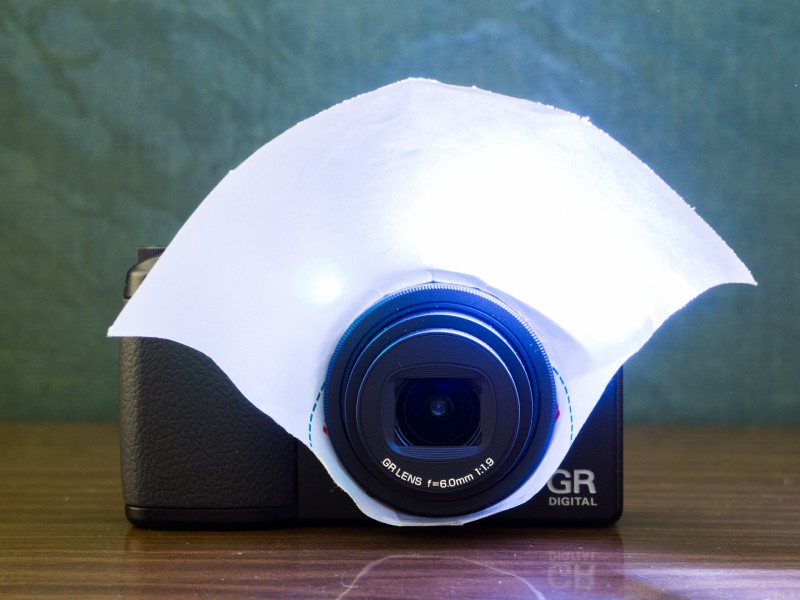 I would also like to show you four of my most recent shots taken with this setup. You can find more in my Macro with Ricoh GRD3 (flash and diffuser) Flickr set. 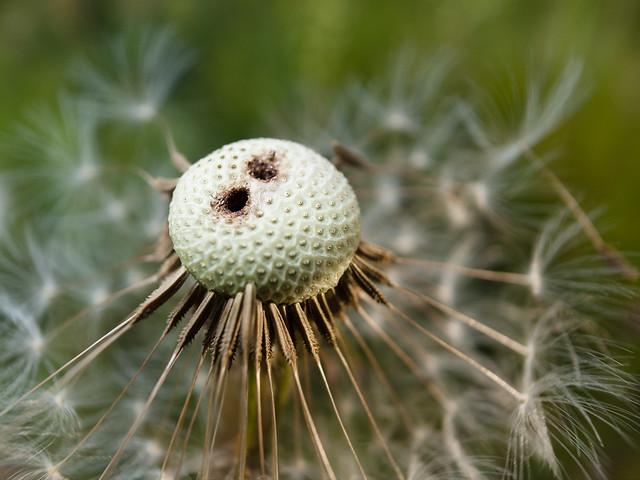 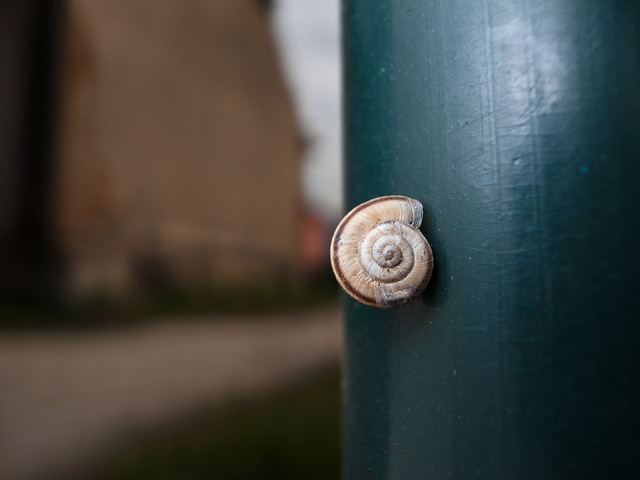 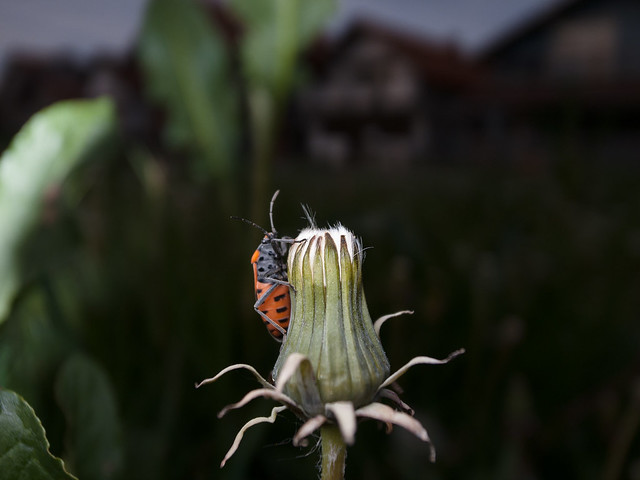 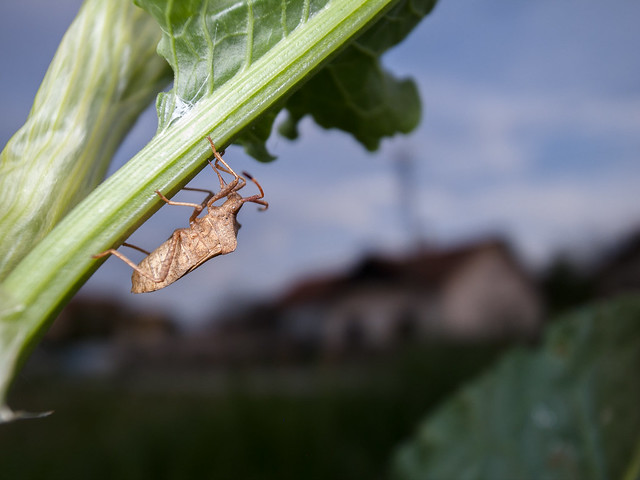